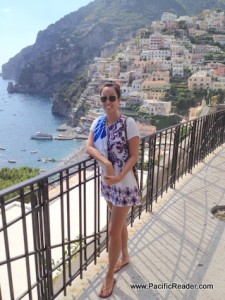 We spent two nights in my beloved  Positano exploring the town and beaches and had two great dinners. Our B&B was basically at the top of the town hill (just like in Manarola) and getting to the beaches, shops, and restaurants meant a hike down a hill and returning home meant hiking up a hill.

Positano had better beaches than Sorrento so the first day we went right down to the beach to lounge and realized that locals love to take advantage of the tourists and charge hefty prices for a beach chair and an umbrella.  We hesitantly coughed over the 25€ for two spots on the beach, but got a cool dip in the ocean, shade, gorgeous sights, and a several hour beach afternoon. 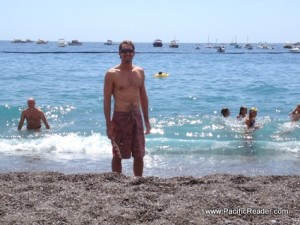 The next day we rented a sketchy kayak for 15€ an hour from one of the boat rental places on the beach.  The kayak was a yellow, no frills, and basically a hard plastic floatation.  With no instructions, no life jackets, and two paddles we journeyed out into the ocean and paddled around for an hour.

There wasn’t another kayak in sight or people on the water that were not in a boat.  The kayak ended up being a great idea, and we got a peaceful paddle along the beautiful cliffs in calm blue water.

We discovered that European tourists are very different from American tourists.  They love to sit around and do NOTHING, as where Americans like to go-go-go on vacation.  We also discovered (half way through our trip) that as American tourists we were very out numbered.  American tourist who were not there from a cruise ship, were very few and far between.  If people spoke English it was because they were British or Australian.  Most of the tourists around were Italian. 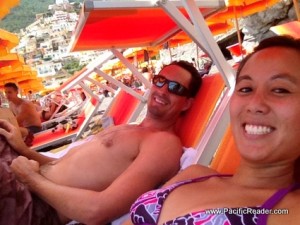 After reading up in the guide book, we read about another beach only 5 minutes away that was more of a locals beach and decided to check it out.  We packed some baked lasagna, fresh tomatoes, salami, and bread with us from the local deli and headed to the beach.  With our good luck, we found a great beach around the cliff that was less crowded and only charged 14€ for two chairs and an umbrella on the beach.  We spent about 4 hours on that beach that day.