You are here: Home / For the Foodies / Foodie Finds / Nachos, Shogunai Tacos Style

I can always depend on a food truck to be in the Ward Avenue area parked right next to Sports Authority during the weekday lunch hour for my hunger pains, and one Monday around 12:30 pm was no exception.  Shogunai Tacos truck was parked there that particular day, and after hearing some great reviews on the truck I was excited to sample their food.  On the starving side, I quickly scanned their short menu of fusion tacos, but my eyes honed in on the Shogunai Nachos. 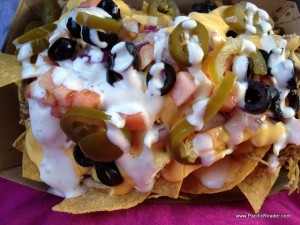 After a couple minutes of waiting, a generous portion of crunchy homemade chips, shredded pork, tomatoes, olives, jalepenos, cheese, and sour cream was given to me for about $7.  My eyes popped open by the size and volume of the mass of nachos, and I proceeded to my car for a chow-fest.

Overall, the nachos were dynamite! The combination of all the decadent ingredients made for one nice bowl of goodness.  The pork was a little on the salty side and the chips were a bit greasy, but it’s technically junk food, so guess I can’t complain right? For about $7, I think that this was an awesome deal! I would definitely order it again, but maybe share it, so I don’t go have to go immediately to the gym and work out from the calorie over load.