You are here: Home / Jet Setting / Grab Your Passport / Tahiti September 2013: The Surf

The main purpose of our Tahiti trip was to SURF. We always heard that the surf in Tahiti was heavy and let me tell you it was! Tahiti is like Hawaii, with warmer water and swell year round, but since Tahiti isn’t as developed as Hawaii overall the beaches are less crowded, the ocean is pristine, and reef and marine life is raw.

We drove our tiny Peugeot all around the island of Tahiti checking different breaks. We quickly discovered that surfing in Tahiti is no joke, and the breaks are way way out, so you better have the paddle power or a boat.  Also, since the breaks are so far out usually in deeper water, and the waves are thick and heavy! Fortunately for my safely, the waves weren’t too big (except for on one day in Mo’orea), so we got to surf almost everyday.

We surfed a local stop near Papara called Taharuu the most during our trip because it was only about five minutes from where we were staying and had the best conditions.  Taharuu is one of the only beach breaks on the island to surf.

One thing about Tahiti surfing that really surprised me was that all the local surfers were so very friendly! Guy surfers always shake other guy surfer’s hands in the line up, and everyone is all smiles and eager to share waves with everyone.  This is a huge 180 from Hawaii local surfers, who are very territorial and can be just plain mean.  I myself have been known to yell at a fellow surfer or two from time to time and usually do not smile in crowded lineups.

Taapuna surf break was the longest paddle of my life, about 45 minutes one way! We could barely see the break from the beach! The water was so deep, and we even got a screaming surprising (me screaming) from a humpback whale!  The whale surfaced only about 20 feet away from the surf break, and it looked like a massive dragon coming out of the water!

One day we took our rental car and rode the ferry to Mo’orea. We stayed the night at a hotel, and got one magical day surfing Haapiti.  The waves were about 5-10 foot (faces) and super thick and scary (for me).  We paid way to much for a boat to take us to the break, but after our 45 minute paddle to Taapuna it was worth the money after we got such a great surf.  Steve and I had a couple of the biggest and thickest rides of our lives out that day.

Tahiti is a very special place and Steve and I are looking forward to returning to enjoy the culture and searching for more epic surf.  Steve and I were definitely humbled after experiencing these quality surf breaks. Watching Teahupoo from the shore and seeing the waves peeling at double overhead size with guys out that look like ants or having a small four foot wave at Taapuna take us over the falls – Tahiti surf is not for the weary.  Steve and I both had sore bodies when we came home, but also beautiful dreams of crystal blue water, endless barrels, and golden sunsets. 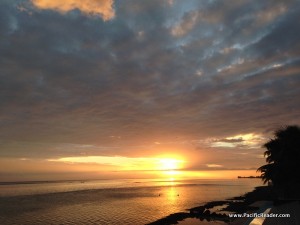