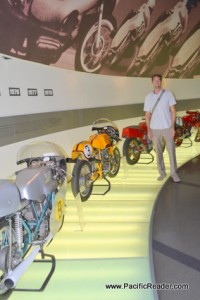 One of Steve’s must dos in Italy was touring the Ducati motorcycle factory in Bologna.  He went online ahead of time and booked us a tour on September 4, 2012.  I, on the otherhand, am not a huge fan of motorcycles, but decided to be a good sport and go along for the tour.

There are tours of the factory most days of the year, but they do require advance bookings and do limit the amount of people a day in the tour.

Our tour group was had about 30 people, and we were split up into two groups.  The tour costs 10€ and lasted about 2 hours.  We got to tour the factory and museum with a bright and smiling female tour guide with long blond hair and tall motorcycle boots on.  We got the full history of Ducati starting in 1926 and the evolution of the brand, motorcycles, and racing. 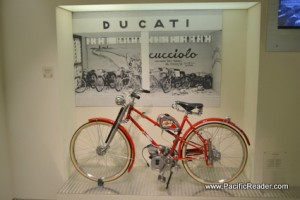 Even being a motorcycle non-fan, I was very impressed by the Ducati tour and their well made motorcycles.  We got to see mechanics in action working on the bikes, since all Ducati bikes are assembled by hand.  The Ducati museum was especially interesting and we saw some of the coolest motorcycles I have ever seen in my life. 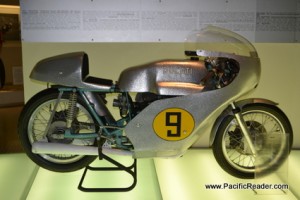 Steve was in la-la land and thoroughly enjoyed the visit.  He even purchased the most ridiculously expensive cotton t-shirt (without asking the price) from their gift shop for 46€, but I thought it was probably better we leave with a pricey t-shirt and not a motorcycle. 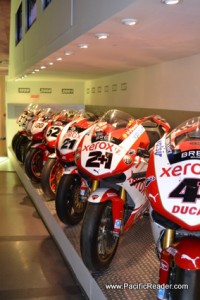