You are here: Home / Get it off Your Chest / Where Did All the Opihi Go? 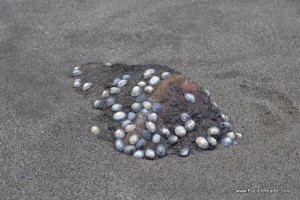 On a recent trip to Molokai we found opihi amongst the rocks of the remote beaches we explored. I was gladly surprised to see an abundance of opihi and thought what a rarity it was to be in the presence of this over harvested limpet.

On Oahu, you can’t really find opihi anymore on the beach or even in a store to buy. Opihi picking has become a rare and dangerous task since the only living opihi are found off remote cliffs.  The Nature Conservancy is currently supporting efforts and working with Hawaiian cultural practitioners, scientists, local communities, resource managers, and government agencies to help restore and protect the Hawaiian opihi populations.  These groups will collect data, educate, and help manage the opihi.

When researching this article I came across an interesting company online called Opihi 4 Sale.  This business was started by a man named Patrick Murphy from Kauai who visited Ireland and discovered yellow foot opihi there.  In 2004 he left Kauai with his sons and started Emerald Island Opihi Company and began selling fresh frozen North Atlantic Opihi to the world ever since. I was surprised to think that opihi is found in Ireland clear across the world from us, but glad to hear there is an alternative for those looking to satisfy their opihi craving without causing our populations to go extinct.

There are three difference species of opihi that live Hawaii.

Opihi Makaiauli: (Cellana exarata) want to be splashed, and don’t mind being dry between tides. The low ribs of their shells are dark and their troughs light. They grow to about two inches across.

Opihi Alinalina: (Cellana sandwichensis) crave constant splash or surge and can’t tolerate drying out for long periods. Their shells grow to about 2 and a half inches across and have a scalloped edge that was used by Hawaiians for shredding coconut meat.

Opihi Koele: (Cellana talcosa) are sometimes submerged and can live in depths of up to 10 feet. Koele are the largest of Hawaiian opihi, growing up to four inches across. Their shells are smooth and thick with a low profile.