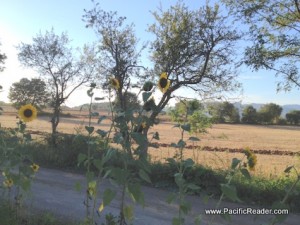 The farm address did not translate well into the gps, and we were led to the middle of no where.  After circling for about 30 minutes, Steve pulled over and asked for directions in downtown Sorano.  He walked into a local bar and Steve said no one spoke a word of English, but one of the men in the bar seemed to know where Sant’Engle was and offered to show us where to go.

We followed his speeding SUV about 3 minutes away and then he pulled off the side of the road and pointed to a sign, our farm stay Agriturismo Sant’Engle!  We graciously thanked him, waved, and then he sped off with his dog.

Sant’ Engle an organic farm and Agritourismo is owned and operated by two Italians Erika and Alessandro.  The original farm structure was built in the sixteen hundreds and has been remodeled to “farm luxury.”  It is located in the province of Grosseto, in Maremma Tuscany, Italy. 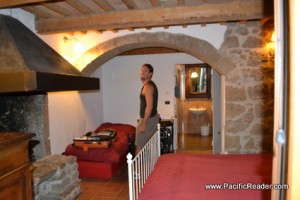 The place was rustic, but hotel clean and had modern amenities like remodeled bathroom, wifi, organic breakfast buffet, mini frig, and tea pot.  The surroundings, scenery, and nearby farms were like pictures out of a book. 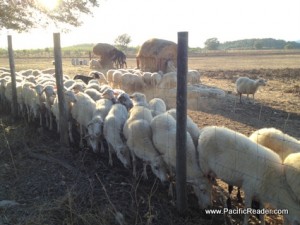 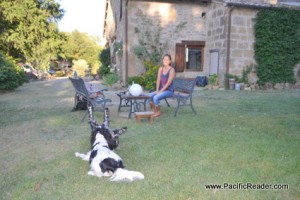 We ended up really loving our stay at Sant’Engle and stayed there for 5 nights.  We got 9+ hours sleep every night, were tv free, jogged the dirt roads in the morning, explored the nearby hill towns in the daytime, and even found an amazing restaurant about 5 minutes away that made the best pizza we had on our entire trip called  Ristorante Il Talismano. 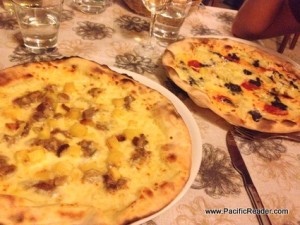 Sant”Engle also has a restaurant that is open on Fridays and Saturdays.  We got to sample a three course dinner that was made with many of their locally grown items from the farm. 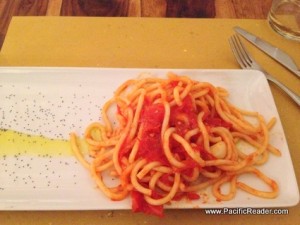