You are here: Home / For the Foodies / Puka Dog in Koloa, Kauai

I spent a couple nights in Kauai over the weekend and explored the entire island soaking up the sun, surf, and of course the food! Kauai seems to be hit or miss in the food department with a mix of gourmet spots and local dives.  Steve and I had some really good meals and some not so good ones.  While grabbing a bottle of wine at the Whaler’s General Store in the Poipu Shopping Village, we spotted Puka Dog. 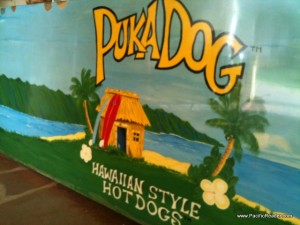 Puka Dog, a “Hawaiian style  hot dog” made its claim to fame on the Travel Channel after Anthony Bourdain featured the Waikiki spot on his show.  Steve and I remembered that show and really wanted to try one.

This little hot dog stand resembled a tired beach shack with a couple tiny tables.  There was a huge list of sauces and relishes that you could put inside your hot dog or polish sausage.  We stood looking at the menu blankly at all the choices and didn’t get much help from the young kid behind the counter.  We finally decided on a polish sausage, mild garlic sauce, pineapple relish, and Dijon mustard.  $6.25 and about a minute later, this is what we got… 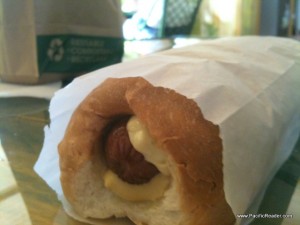 Let me first start off by saying that the amount of bun is ridiculously huge, in a bad way, and it took me about three bites before I hit polish sausage.  Small sausage or too much bread? I dunno, but I felt like I was eating a loaf of bread with a side of sausage.  The sauces and relishes inside were very bland and the “garlic lemon secret sauce” was hardly notable and tasted like mayonnaise with a slight hint of garlic in it.  The pineapple relish tasted like a pineapple sauce that just made the puka dog taste sweet.  The Dijon mustard got lost somewhere in the bun, so who knows if it was even in there?

Overall, Steven (the hot dog expert) and I were disappointed in our puka dog, especially with a high price of $6.25.  Costco offers a better polish dog for $1.50, and the polish sausage is probably double the size.  There was so much bun that after the polish sausage was eaten we ended up throwing out the remaining 1/4 of the bun.

It wasn’t that the puka dog was terrible, but just not the gourmet marvel that I had anticipated.  If I was starving I might eat another one, but I would try to get someone else to pay for it, and hope there are birds nearby to help me eat the leftover bun.