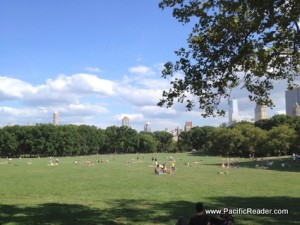 We arrived in New York city on August 13, 2012 and spent two action packed days there.

Our first day was sunny and gorgeous, so we got to take in the beautiful weather and jogged around Central Park.  We stayed in the Theater District near Times Square and got to take in all the city action and amazing food! We went to the famous Carnegie Deli where Steve and I ate ourselves sick with some of the best corned beef, pastrami, tongue, and salami I have ever eaten.  I even found the best Mexican taco truck with on the spot made carnitas chalupas with a jalapeno sauce that was to die for!

On our second day we went to Rockefeller Center and happened to be walking by when Nicki Minaj was performing for The Today Show.  We then took the subway to Soho and did some shopping for Megan and Duane!

After shopping we went to the MoMA, The Musuem of Modern Art and saw some amazing art.  Some of the standouts were by Andy Warhol, Taryn Simon, Pablo Picasso, and Claude Monet.

That night we saw the Spiderman Broadway show, which by the way was so cool! Spiderman was singing and dancing, and even flying through the air!!!

We leave for Milan today.  Can’t wait to see what Italy has in store for us…