You are here: Home / Get it off Your Chest / The Truth About Rail on Oahu

In the last mayoral debate, Ben Cayetano emphasized a very important point that hit me hard, “It’s not just about rail. It’s about power.” Building the rail will be the biggest and largest example of the power that will be taken away from the people of Hawaii.  The expansion of Kapolei, huge store like Target being built, more city high rises, and more housing developments are examples of this power.  Oahu does not NEED these huge developments!  We NEED better public school systems, roads, healthcare, affordable housing, shelters and programs for the homeless, etc.

The island is very split on rail.  Half of the island doesn’t seem to mind the idea of rail (pictured above) or huge developments.  Others (like me) are repulsed by the idea of an enormous infrastructure on Oahu’s skyline that will take 20 years to build, bankrupt the island, and put the island’s real problems to the side. 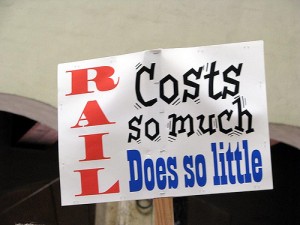 Solutions? Mass Transit Bus system that will cost 1/5 of steel on steel rail? Light street rail? Bettering the existing roads? Hot lanes? Pretty much anything is better than a massive $5.3 billion rail.  Don’t allow yourself to get brainwashed by all the pro-rail commercials on TV.  The information is extremely misleading and frankly makes me want to vomit.

For more information on the facts about rail on Oahu here are a couple great sites to check out: