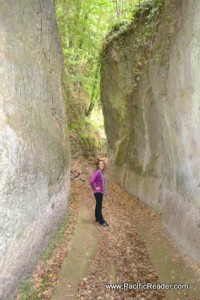 The areas of Sorano, Pitigliano, and Sovana are known for their vie cave, pronounced vee-ah cavay, meaning sunken roads.  The vie cave are narrow paths that the Etruscans (pre-Roman civilization in ancient Italy, similar to the Egyptians) cut into the tufa or soft stone.  These paths were used as roadways to link settlements and necropolis that housed Etruscan tombs.

There are several vie cave that people now days can visit, and they are more like a recreational walk or hike.  The two cave that we hiked were the Via Cava di San Giuseppe and the Via Cava of San Rocco.

These cave are a must see if you are in the area.  Standing in these carved trenches it is hard to believe that they were built as early as 2nd century B.C.  Since there are necropolis through out the paths, the air and feeling of the area is very sacred and ominous.  We had a great time hiking around and imagining what it might have been like to live in B.C. times as an Etruscan.