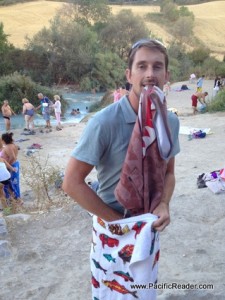 The area of Tuscany that were were in is known for their termes or natural hot springs.  One day we visited the Terme di Sorano, and it was more like an amusement park-country club in one and charged 9€ a person to enter.  It was nice, but we didn’t like the commercial exploitation of the whole thing.

We heard about a bigger and more famous terme about 60 kilometers away from Sorano called Terme di Saturnia.  There was suppose to be an area down stream that locals went to that was free.

Terme di Saturnia is located in the Manciano Province of Grosseto and after visiting the town of Montalcino Steve figured that we could get to the terme in about 45 minutes.  After about a million windy roads, an hour and a half later, and many complaints from me we finally found the terme. 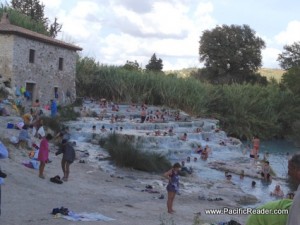 Speedos, wrinkly old people, couples making out, no foreign tourists, especially Americans, Steve and I were definitely out of our element and got a few too many stares in our direction.  We shook off the stares and took a soak in the luke warm sulfur smelling water. 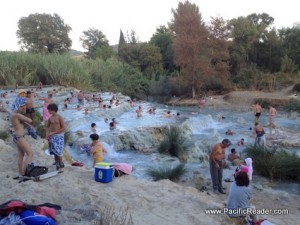 The water was soothing and not as warm as I had wished, but still nice and relaxing since the air outside was cool.  There were tiny little smooth pebbles in the terme that were nice to sit on, but got into your bathing suit.  This trip to the terme was definitely one of the most unique on our trip, and we were happy to see that something in Italy was actually free, since they seem to charge for everything else!